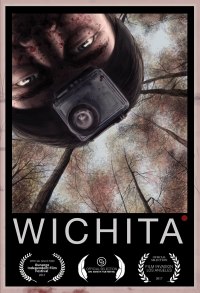 Wichita is about a filmmaker named Jeb (Trevor Peterson). Jeb is the creator of a TV series that is in decline. In order to try and save the show, he sets up a writing retreat for all of his co-workers to join him at a secluded home in the mountains. Little do they know that Jeb has wired the house with hidden cameras, due to his obsession with watching and manipulating their lives. Unfortunately for Raven (Persia White), she is his biggest obsession. When Jeb is eventually fired, he loses his mind completely and returns to the retreat with his camera where he sets himself on a horrifyingly violent rampage in hopes to capture it all for one final masterpiece.

We’ve been watching a lot of horror movies lately and Wichita joins in the middle of the pack. It takes a while for this movie to get going and once it does, it still didn’t quite have us on the edge of our seats, but it did have us trying to figure out what Jeb would do next. This movie takes a lot of the classic horror moves into play, so a few of the scenes seemed predictable. Trevor Peterson played an amazing role as Jeb though! It’s very easy to get caught up in his character’s story and that is why we have to applaud him. One thing we wish directors Justyn Ah Chong and Matthew D. Ward did with this movie, is utilize the hidden cameras more. It felt like hidden cameras were going to be a big part of the story line and they just weren’t used as much as we thought. In the end, Wichita isn’t bad, but it also isn’t great. Its average and we’re okay with that because most horror movies have been fairly underwhelming lately.