Spirit Game: Pride Of A Nation

Spirit Game: Pride of a Nation is a documentary that follows The Iroquois Nationals Lacrosse Team on the road as they compete in the 2015 World Indoor Lacrosse Championships. For the first time ever, the World Championship Games were hosted by a native nation in Onondaga, New York, the Capitol of the Iroquois Confederacy. The documentary covered the true meaning of the game from the Iroquois, who originated it and called it their “medicine game.” The documentary also gives a bit of history on what this sovereign nation had to go through, to be recognized by the Federation of International Lacrosse. They experienced years of misfortune, but always managed to keep the faith and appreciate the game, which is a testament to the type of people the Iroquois are. 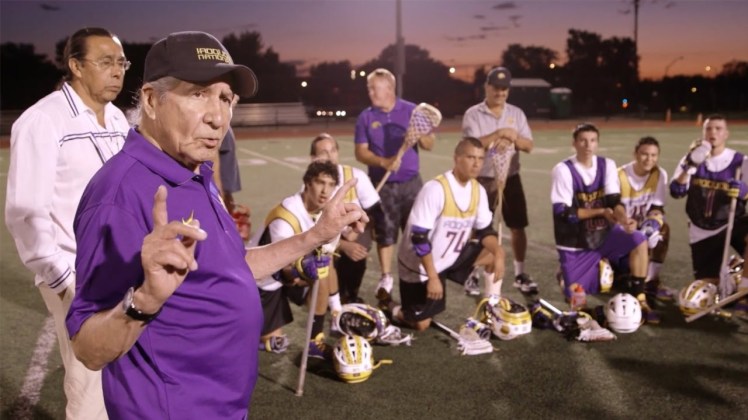 We are suckers for documentaries, especially ones about sports. The documentary did a great job showing the Iroquois culture and how important the Iroquois Nationals Team is to them and their history. While countries have national sports for example; the USA has baseball, England has cricket, and Canada has Ice Hockey, the Iroquois have lacrosse. Except, the Iroquois don’t have hundreds of thousands of players to pick from… they have roughly 400 players to create a championship team with. Even at this disadvantage, they were able to compete at such a high level in the 2015 World Indoor Lacrosse Championships. It was truly amazing to watch the Iroquois band together to host the WILC. When they faced Canada in the championship, they didn’t even hold a grudge towards them for “skipping” the passport stamping (the only team at the WILC that did not attend this ceremony), the Iroquois just played the game as they knew… with all of their heart. Throughout the movie, they had us thinking about our own sports memories. Whether it was traveling and playing professional WIFFLE ball with our team, Way Too Beautiful, or having the same mindset as the Iroquois growing up playing baseball and hockey. This movie hit us right in the feels. By the end, not only do we now want to go visit the Iroquois Nation, but we also want to follow them during the next World Championship Games!