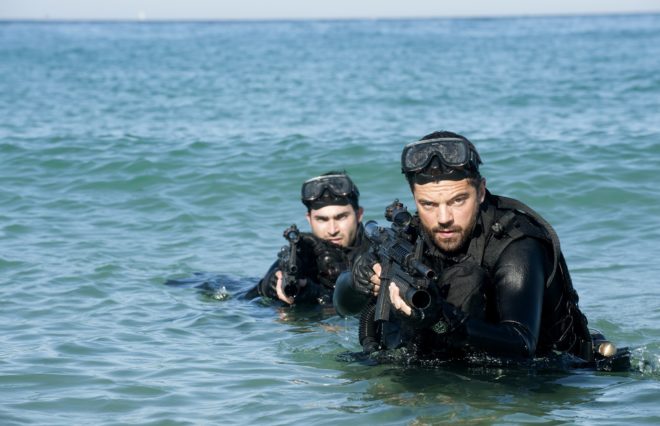 Stratton (based on the novel series of the ​same name), a Special Boat Service operative for MI6, and his American counterpart Marty, scope a laboratory complex in Iran in order to intercept deadly biochemical weapons. This most complex of missions goes spectacularly wrong however and in the mayhem Marty (Tyler Hoechlin) is mortally wounded. Stratton (Dominic Cooper) knows his trusted friend isn’t going to make it. Back at base Stratton is summoned by the big boss at MI6 (Connie Nielsen). She has received intel that a former Soviet operative, Barovski (Thomas Kretschmann), has gone rogue. Thought to be dead for the last 20 years, it is believed Barovski has plans to take revenge on his former paymasters by using stolen chemical weapons. From hereon in, Stratton and his team (Austin Stowell, Gemma Chan, Jake Fairbrother, & Tom Felton) must draw on all their training and experience to race against time and stop the unimaginable happening.

Stratton is your typical mindless action movie. Reminded us of a lower budget James Bond or Jason Bourne. We found ourselves getting caught up in the plot (at the time), but in a few days we’re sure it will blend into every other movie that’s similar and we’ll forget exactly what the plot was. It was nice seeing Malfoy (Tom Felton) in another movie, that isn’t Harry Potter, but it did lead us to make assumptions about his character in Stratton (and we weren’t too far off). Also in reference to the acting, Gemma Chan… give her more scenes! That certainly wouldn’t have disappointed us if she was more involved.

We’d recommend waiting for Stratton to hit Netflix or a free movie channel as opposed to paying to see it in theaters or renting through On Demand, but we do suggest giving it a watch. And to be honest, we wouldn’t be opposed to seeing a sequel.