Blood Hunters: Rise of the Hybrids

“In an alternate world much like our own, fearsome vampiric creatures terrorize the lands and people live in fear. Mercenaries, called Blood Hunters, are employed by a dubious scientific firm to hunt down these creatures and extract their vampire blood for the purposes of weaponizing them. Gabriela Chen (Sarah Chang) is a former cop-turned-rogue hunter in search of the Aswang beast that killed her family, Naga (Temujin Shirzada). After an unsuccessful fight with Naga and the Kapre (Tree Giant) warlord, Gundra (Mekael Turner), she is rescued and brought back to a remote jungle training facility of a group of Blood Hunters called the Slayers. They are soon joined by a hybrid (half-human, half-Aswang) now on a vengeance trail, using syringes of Aswang blood to enhance his strength and survive. After the death of an Aswang queen, former Blood Hunter leader injected her blood into his own veins, transforming into a monstrous hybrid, eventually propagating a new breed of Aswang as his own army. Vanguarded by his lieutenants and a distant dark horse in the midst, their plan is to destroy the Slayers, including the avenging hunters, to curb and undermine mankind’s chances against their elusive and growing threat.” 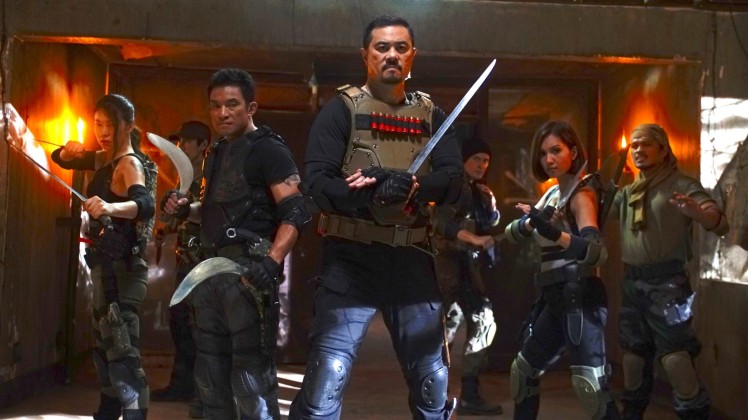 Blood Hunters: Rise of the Hybrids is based off the mythical Filipino creature called the Aswang, which is half human and half monster. The movie sort of reminded me of Blade and after you read my Q&A with Vincent Soberano at the bottom, you’ll see why.

I didn’t hate Blood Hunters, but unfortunately I also didn’t love it. The first half of this, hour and ten minute long, movie was story building and the second packed in every second of action it could.

I was able to have a small Q&A with Vincent Soberano (director/writer/Bolo/Tabak), Monsour Del Rosario (Monte), and Sarah Chang (Gabriela/Grandmother) of Blood Hunter: Rise of the Hybrids.

First up, is our Q & A with Vincent Soberano (director/writer/Bolo/Tabak):

Q: What spawned the idea for Blood Hunters?

A: Blood Hunters (the movie) is based on a comic book that I wrote/drew with the intention of one day turning it into a movie. As a kid, I had always been fascinated and terrified of the mythical Filipino creature called “Aswang” – a part human, part monster type of vampire. Also as an avid martial artist, I wanted to create a story wherein highly trained humans are pitted against the powerful Aswang – in the same vein as “Blade” but with a Filipino twist. I wanted to showcase FMA (Filipino Martial Arts) and bring together real martial arts masters in one film.

Q: Looking at IMDb, I noticed there was a “short” version of Blood Hunters… is Rise of the Hybrids an extended version or a sequel?

A: Blood Hunters is the full-length version and sequel to the short film. In fact, the short film is integrated into the feature as a back story. I made the short film originally as a pitch film, but ended up with a viable and competitive short film that garnered several laurels and awards in international film markets.

Q: I loved the comic book aspect of the movie… did you ever consider the entire movie being animated or was a mix of live action and animation something you always wanted?
​
A: The movie is based on a comic book that I published locally in the Philippines. I do have plans on turning the movie into a video game which would actually mix live action and CGI graphics in a sophisticated gaming engine. That’s still in the works, as I’m waiting for the movie to be released first.

Q: If you could go back to the filming of Blood Hunters, is there anything you would change?

A: Hindsight is 20/20. Blood Hunters was the first feature that I produced, directed and acted in. I worked with a brand-new production team that I have no background or experience with. We had a small budget and we actually ran out of money. Because of that, we were not able to shoot several key scenes that were part of the script and could have really added to the storytelling. In hindsight, I realize I could have prevented that budget problem had I managed the funds myself and understood the local industry and prices.

Q: Do you have any future projects in the works?
​
A: Since then, I’ve done a string of action films, mostly features. I’m currently working on a new action project, commissioned by a big studio, ABS-CBN. The film “Hard 2 Kill” is an action/drama rooted in current issues here in the Philippines such as kidnappings, drugs and illegal gambling.

Q: Not including Blood Hunters, what is your all time favorite action and/or vampire movie?

A: I’m a huge fan of “Blade” with Wesley Snipes. “Resident Evil” and “Underworld” are also my favorite action/vampire movies with lots of kickass martial arts.

Next, is our Q & A with Monsour Del Rosario (Monte):

Q: What were training days like for Blood Hunters? Were you in charge of training the
entire crew or just having yourself prepared?

A: My training days for Blood Hunters consists of practicing my Tae-kwon-do kicks,
boxing bunches, and Filipino Martial Arts – Kalis Ilustrisimo fighting system techniques. I helped out in training some of the crew, but not all of them. We divided the work
between Vincent Soberano, Sarah Chang, our fight instructor, and myself.

Q: What made you request the role of Monte?

A: Monte is a Human being in the movie. His character on the film is a bad ass fighter with a heart. A character I can portray quite well with all my acting experiences that spans over fifty action movies that I have worked on.

Q: Does your life consist more of Martial Arts or acting these days? Which do you enjoy
more?

Q: A bit off topic, but we noticed you were born in Manila… did you get to experience the
Thrilla in Manila? If so, what was that like?

A: Yes, I was born in Manila and yes I experienced the Thrilla in Manila, but only on T.V. I
was a very young boy when Muhammad Ali and Joe Frazier fought in Manila. All I
remember was that everyone at home and on the streets didn’t stop talking about Ali and Frazier. They were HUGE back then in the 1970’s.

Q: Do you have any future projects in the works?

A: I have one ready to work on this April 2020, but because of the outbreak of the Coronavirus in Metro Manila, it was postponed until this virus is over.

Q: Not including Blood Hunters, what is your all time favorite action and/or vampire
movie?

A: My favorite ones are the ones Wesley Snipes made: Blade 1, 2, and 3.
I also like “Interview with the Vampire” of Brad Pitt and Tom Cruise. And lastly, “Salem’s Lot” – I enjoyed watching these kinds of action – thriller – vampire movies.

Lastly, is our Q & A with Sarah Chang (Gabriela/Grandmother):

Q: Looking at IMDb, it seems as though you just started getting into acting these past few years, is this true? If so, are you enjoying it?

A: Yes, I just got into acting about five years ago. That’s when I moved to Beijing to attend the Central Academy of Drama in Beijing. I definitely enjoy it a lot. It’s been a big self discovery and learning experience.

Q: How did you get involved with acting? Is it something you’ve always wanted to do? What is your life like outside of acting?

A: Because of my wushu background everyone would tell me that I should be an action star. I would always say, oh I can’t act because I can’t lie hahaha. I used to have such a big misconception about acting. I really had no idea what it was. But regardless, that thought was always at the back of my mind. It wasn’t until my friend Michael Tan, who was action directing a music just five years ago, that I actually was exposed to the entertainment industry. He asked me to help assist him with teaching action to a five girl group. It was a really fun experience and he introduced me to Jimmy Hung‘s action team in Taipei and I continued to do action in movies and then later went to acting school. Right now, my life outside of acting consists of producing and spending time with my baby girl!

Q: What has been your favorite role so far?

A: My favorite role to play as a character so far has been the Wanda Films and DJI Production “The Teacher.” For fighting and action scenes, definitely Gabriela.

Q: How did you get picked to play Gabriela in Blood Hunters and how did you prepare for the role?

A: I had met Vince in the Jackie Chan Training Center in Beijing. Several months later, I connected with him about using his gym as a location for a documentary. I visited the gym and he told me that he would be leaving to the Philippines the next day to shoot a movie. Of course, as an actress, I had to tell him to consider me if there were any suitable roles and I sent him my profile and demo reel. To my surprise, about a week later he contacted me saying that they were considering me for the role of Kali and I had to send in an audition tape. I sent it in and I was selected for the role. The catch was, once I got there, they thought that my fighting ability was much better than the lead actress, so they actually decided to cast me as Gabriela instead. It was a crazy experience! Once I arrived in the Philippines there were several rehearsals and acting workshops that prepared us for the movie. I trained really hard to get all the choreography down, I actually sprained my ankle while training, but was able to push through for the shoot.

Q: If you could go back to the filming of Blood Hunters, is there anything you would change?

A: I think as my first lead role for a feature film, I think I wish I had relaxed more for shoot and focused a bit more on the acting side. We had just intricate choreography and fight scenes, that I lost sight of the acting part.

Q: How much training/practice was involved to prepare for the fighting scenes in Blood Hunters?

A: We trained for about two months with some of the most decorated FMA masters of the Philippines. It was very intense.

Q: Do you have any future projects in the works?

A: Right now, I’m in pre-production for the movie “Hard to Kill” and shortly after I will be working on another project called “Manila Hostage.”

Q: Not including Blood Hunters, what is your all time favorite action and/or vampire movie? 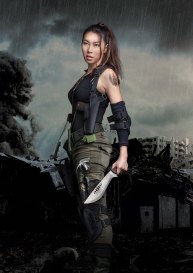